LED illumination provides an economical and decorative solution for industrial, commercial and residential usage. There is a wide variety of LED solutions, that can be adopted to any size, color and location according to the functional and design needs. It can provide a solution for museums and galleries, hotels, hospitals, offices, warehouses, industrial plants, buildings with high ceilings, parking lots and private homes.

Due to its low-voltage demand, LED is also suitable for outdoor use for street and garden illumination.

Due to its low-voltage demand, LED is also suitable for outdoor use for street and garden illumination.

LED illumination devices do not require special preparations and can be installed directly to existing light socket and supply the same light strength with less electricity (approximately 60% consumption) and with a significantly larger life span (approximately 50,000 hours), which also results in reduced maintenance costs. Although the initial investment is slightly high but ultimately worth the cost.

The standard lamp spreads the light at a 360 degree angle and the actual light intensity reaching the floor is only 55% of the power generated. The LED lamp is directional and its illumination angle is narrow, so it is possible to achieve much higher light efficiency (close to 100%). 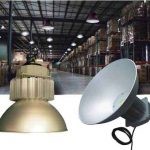 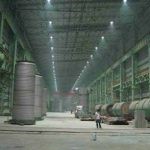